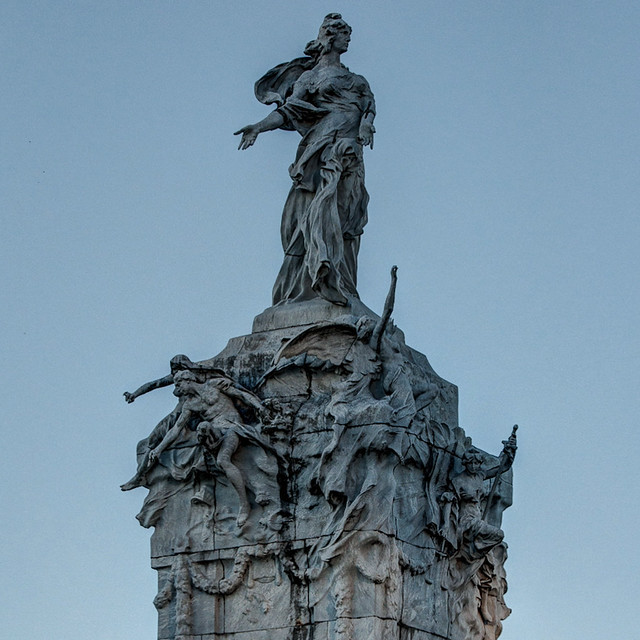 The Monumento de los Españoles (Spaniards Monument), also known as the Monumento a La Carta Magna y las Cuatro Regiones Argentinas (Monument of the Magna Carta and the Four Argentine Regions), is one of the most renowned in the city and was a gift from the Spanish community for the Centennial of the May Revolution.  Although the founding stone was set in 1910 when the Catalan Agustí Querols Subirats began its design, he passed away shortly and the building of the monument suffered many setbacks taking a long time to build.  After Querol’s death, Cipriano Folgueras was assigned the project but he also died in the meantime and so the monument’s rising was further delayed. Another unfortunate event occurred in 1916 when the ocean liner that was carrying the materials for the monument sank midway.  Finally, the stunning 24,5 m high marble and brass monument was finished and inaugurated in 1927.

At its top is a symbolic statue of the republic with allegoric marble representations of labor and work at its base, and bronze figures that represent the Andes, Pampa, Chaco and de la Plata regions. Its inscriptions include a fragment of the Argentine constitution that proclaims freedom for the country and for any person in the world who wishes the make Argentina their home and also four statements that proclaim the brotherhood of Argentina and Spain, their people, their language and their destiny.

The stunning statue is the largest and one of the most beautiful monuments in the city. It is located in Palermo on the intersection of Av. Libertador and Av. Sarmiento.