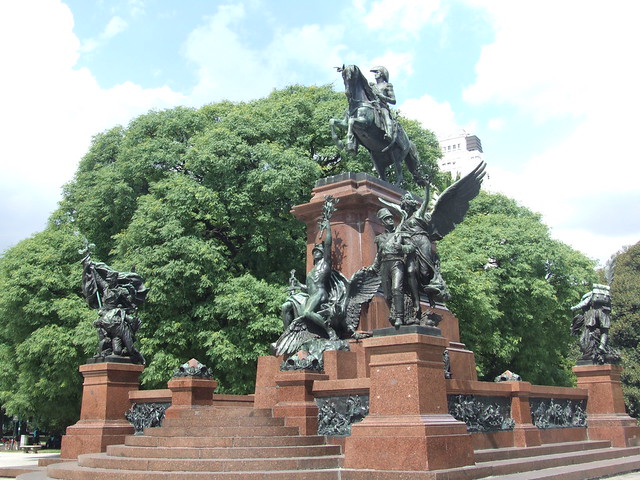 The fiery red marble granite and bronze monument in Plaza San Martín commemorating the famous General San Martín and the independence troops is hard to miss. The statue was commissioned to French sculptor Luis José Daumas, who specialized in equestrian themes, following the footsteps of the Chilean government who had already hired the artist for the same purpose.

Daumas designed the figure of the general inspired by a portrait San Martin’s daughter had, and by a lithography that Theodore Gericault had done of San Martín pointing the way to his soldiers. The sculpture arrived in Buenos Aires in 1862, originally on a white marble pedestal and was placed at the landmark where the leader of the independence movement had organized his troops.

In 1909, German sculptor Gustave Eberlein was commissioned to include additional ornaments to the existing sculpture. It was then that the base was changed to red granite. Surrounding it, he included four smaller sculptures representing the departure to battle, the battle, the victory and homecoming. On the sides of the granite base are representations of the Andes crossing, the independence proclamation, the Battle of Salta and the possession of Montevideo, all important historical moments related to the country’s independence.