Winter chill is here, but that’s no reason to miss out on the vibrant BA nightlife. To make the best of it, here are 5 hotspots with a fireplace in Buenos Aires to turn up the heat.

The Scandinavian know how to do winter, and al Olsen the great cuisine and decor, plus an amazing variety of vodkas and a fireplace, make this a top spot to stop by on chilly evenings. Gorriti 5870, Palermo.

For the classic who like to watch the wood burn with some quality whisky in hand, the Oak Bar in the Hyatt Hotel is just the place.  Av. Alvear 1661, Recoleta.

This Palermo centered bar is spacey, modern and serves some great cocktails. Stop by to get the night started by the flames of their chimney and get into the groove for a fun night in the town. El Salvador 4968, Palermo.

Posh and upbeat, Isabel is the place to go for sophisticated night owls that like their drinks done right. Unlike the other venues, this one has its always lit fireplace set outside in the courtyard. Uriarte 1664, Palermo

This UK inspired pub that also serves curries is a great winter spot to drink draught beer during happy hour, they don’t always light their fireplace, but it’s still cozy and upbeat enough to keep the spirits high. Humboldt 1416, Palermo

Check out the MALBA’s two new exhibits, one of controversial Argentine artist Rogelio Polesello, and the other of a collection of video art by different artists that depict important historical and socio-political events. Av. Figueroa Alcorta 3415, Palermo.

In the afternoon, stop for some churros with dulce de leche at La Giralda or for some tea and sweet treats at the traditional Confitería Las Violetas and then work off those medialunas by dancing at the nearby Centro Cultural Konex where La Bomba del Tiempo, a percussion orchestra that has become one of the local musts, will be showing off their drumming skills. Sarmiento 3131, Abasto. 4864-3200

Try some mate, practice some Spanish and meet new people at the Tuesday Mate Conversation Club that starts at 6.30pm. Sign up at mateclubdeconversacion@gmail.com . Uruguay 862, downtown.

One of the city’s architectural landmarks is the famous Palacio Barolo, full of references to poet Dante Alighieri. Guided tours take place from 4pm to 7pm and evening guided tours at 8.30pm include tasting of an awarded wine and a national delicacy. Av. de Mayo 1370, downtown.

From 9pm onwards you can stop by Isabel Bar in Palermo, one of the hottest nightspots for cocktails in the city. Uriarte 1664, Palermo.

Thursday is a national holiday as Argentina celebrates its Independence Day. Stop by Avenida de Mayo for traditional hot chocolate and churros at one of the renowned café’s or head to Feria de Mataderos to catch some local folklore and other typical festivities.

Book your place for the full parrilla experience with Parrilla Tour. These filling excursions, which take place in San Telmo on Fridays, will surely leave you satisfied.

Stop by the Palermo Rosedal where you can rent paddle boats to cruise the small lake alongside the ducks, and visit the Sivori Museum, which offers free tours in English and German on Saturdays at 3pm and 5pm! Av. Infanta Isabel 555, Palermo.

Throughout the weekend, check out the performances taking place as part of the Festival Piano Piano at the Centro Cultural Kirchner. More information here 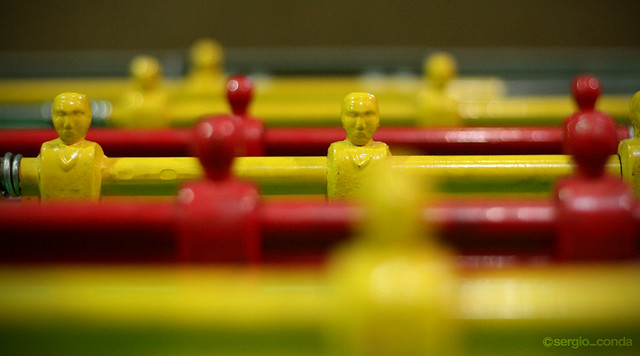 The 2013 BAFICI animation film festival kicks off today until the 28th of July. This second edition of the event is proof of the booming local industry and international popularity of animated films, in which 3D has taken protagonism. The festival will screen both local and international animated films, including 12 short film programs and 14 feature films that include movies for children (BAFICITO section) and adults (BAFICI section).  One of the most awaited releases of the year is Metegol (Foosball) a 3D film directed by Oscar winning director Juan José Campanella. At the Centro Cultural Recoleta, there will also be an exhibit of drawings, storyboards, and more related to the production of this ambitious film, which is the most expensive animated film produced in Latin America to date.

The program for the film festival can be acquired here. Tickets are sold from Wednesday to Sunday from 1pm to 9pm at the Centro Cultural San Martín.  Paraná and Sarmiento, Downtown.

Stop by La Rural, the annual agricultural and livestock show, and get a feel for the Argentine campo, where so much of the local identity and economy has been forged. The fair takes place from the 19th to the 31st of July at La Rural. Av. Sarmiento 2704, Palermo.

In the afternoon stop for some tea and sweet treats at the traditional Confitería Las Violetas and then shake off the cold at the nearby La Bomba del Tiempo, a percussion orchestra that has become one of the local absolute musts. Centro Cultural Konex Sarmiento 3131, Abasto. 4864-3200

Fundación PROA in La Boca is showcasing two new exhibits. The first features Argentine and Brazilian contemporary pop art, realism and political art, and the second is a collection of works by Roberto Aizenberg and younger artists who have been inspired by him.  Av. Pedro de Mendoza 1929, La Boca.

Don´t miss the chance to see Russia’s top ballet dancers on stage at the Teatro Coliseo.  There will be three performances on the 31st of July and the 1st and 2nd of August at 8.30pm. Tickets here.

Head to the Dorrego Flea Market in Palermo, which is often overlooked and is the perfect place to go on a treasure hunt.  Antiques and curious finds are waiting to be dug up and claimed in this charming neighborhood market. Open Tue-Sun 10am-7pm.  Av.Dorrego and Conde.

Take a free tour of Buenos Aires with Jonathan, an Englishman in love with the city. Tours start every day at 11am at the center of Plaza Italia by the Garibaldi Horse monument and cover the areas of Almagro, Congress and the Plaza de Mayo using local transport to get around. More information here.

For a unique evening, book your place at Fierro Hotel’s Thursday wine tasting and sample some great Argentine wines, chosen by the president of the Argentine Sommelier Association Andres Rosberg and in-house Sommelier Martin Bruno. Tastings, which include special tapas from Hernán Gipponi Restaurant, cost 25 USD per person and are limited to 7 people. Soler 5862, Palermo. 3220-6800.

(Photo by Mulling it Over)

Book your place for one of Norma’s cooking classes and learn to make typical Argentine food such as locro, empanadas and the delectable alfajor. Classes run every Saturday from 11am-2pm and include lunch. More information here.

Head to the Planetarium in Palermo for one of the special screenings of Journey to the Stars. You can also access the planetariums telescopes to get unique views of the sky. Av. Sarmiento and Belisario Roldan. 4772-9265

The inaugural edition of the BAFICI animation film festival kicks off  tomorrow with a broad program of films from around the world. The festival, which has both a selection of films for adults, and one for children will take place at the Centro Cultural San Martin. Some of the most awaited titles include Arrugas, a feature film about Alzheimer’s by the Spanish Ignacio Ferreras that recently won the Goya award for best animated film; ¨Mundo exterior “, a group of short films by international directors; Plymptoons, a compilation of renowned animator Bill Plympton’s cartoons; the six-episode Russian saga Masha and the Bear and the Japanese The Secret World of Arriety, featuring a screenplay by the acclaimed Hayao Miyazaki.

Tickets to the festival are already on sale and are 20 pesos for adults, and 10 for students and children. They can be purchased online here, or at the Centro Cultural San Martín from midday to 9pm. Sarmiento 1551, downtown.

Head to the posh Recoleta neighborhood and stop by the Centro Cultural Recoleta where Daniel Mordzinski´s photography will be exhibited, showcasing pictures of Ernesto Sabato amongst other authors.

Should the afternoon get grey and stormy as the forecast says, head to the close by Alvear Palace Hotel for a decadent 5 o’clock tea served in the LOrangerie Restaurant from 4.30pm-7pm.

In the evening  head to Gran Bar Danzon for their wine happy hour from 7pm-9pm.

Find our more about the country’s ethnographic heritage at the Museo Etnografico.

In the evening head to the chic ¨Le Bar¨ for some great drinks and live music starting at 10pm.

In the evening John Stowell and the Ale Demogli Quartet will be presenting Textures &Counterpoints at the Thelonious Jazz Club.

Design enthusiasts will be able to catch a glimpse of the up and coming designer at the Design Fair being held at the Palermo University.

Book your place for the Fierro Hotel’s Thursday wine tasting and sample some great Argentine wines, chosen by the president of the Argentine Sommelier Association, Andres Rosberg, and in-house Sommelier Martin Bruno.  Tastings cost 25 USD per person and start at 7pm.

Have a leisurely lunch overlooking the city at the German Club (Club Aleman) where not only are the food and view great but also quiet with a no cell phone policy.

In the evening Blind Melon will be playing in Club Niceto, tickets available here.

Take a ride on the historic tram and visit the Caballito neighborhood. Every Saturday from 3pm-7.30pm and Sundays from 10am-1pm and 3pm-7.30pm starting from Emilio Mitre 500.

Highlights of the scientific and technological advances of the country, as well as special events and shows are being exhibited in Tecnopolis, a technology and innovation fair which will be open until August.  The fair is in the outskirts of the city so we suggest you have the hotel help coordinate transport. General Paz between Balbin and Constituyentes. Villa Martelli.

Have  a special lunch at the MALBA´s French restaurant, Cafe des Arts, and then spend the rainy afternoon browsing the museums permanent collection of Latin American art and the temporary exhibit of Argentine Contemporary art.

Liven up your evening at Notorious, where cheerful live Brazilian fusion music by Jonga Zambo will be playing.

The city museum ( Museo de la Ciudad) is showcasing a special exhibit on Boxing and other sports that have influenced the culture. For an afternoon submarino (hot milk with melted chocolate) in a picturesque corner of San Telmo, head to  traditional Bar Seddon, just a few blocks away.

In the evening head to the Wherever Bar in Palermo for their 5pm-9pm happy hour and British music.

Find out more about popular art and artisans work at the Museo de Jose Hernandez, where you will find ceramics, baskets, knits, instruments and other handmade traditional objects made from local materials.

Club Niceto and Ill Ballo del Mattone are cohosting an Art Party in the evening where some of the local contemporary work will be exhibited as well as live shows ending in an upbeat party that will last until dawn.

Highlights of the scientific and technological advances of the country, as well as special events and shows are being exhibited in Tecnopolis, a technology and innovation fair which will be open until August.  The fair is in the outskirts of the city so we suggest you have the hotel help coordinate transport.

The annual cattle farming and agricultural fair will be taking place until the 26th of July at La Rural in Palermo,  showcasing cattle, horses, and other animals as well as regional products and goods and other aspects of the local industry.

In the evening the Centro Cultural Rojas is hosting a party inspired by Gaby Kerpel, a local music-theatre icon who was one of the founders of De La Guarda and who plays a fusion of electronic music with local folklore.

Saturday-Sunday: Catch one of the shows being staged at the International Puppet Festival.