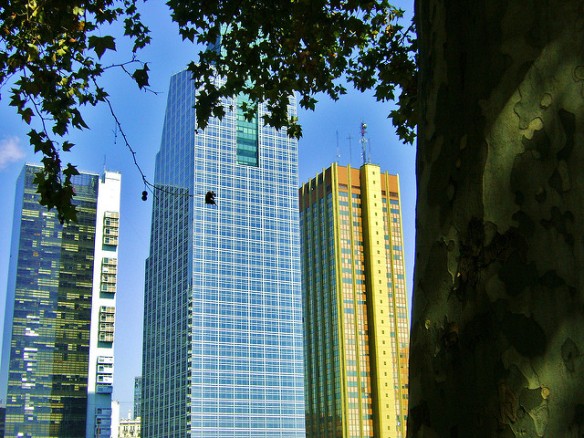 Named after the UCR political party founder Leandro Alem, this bustling avenue spans from Plaza San Martín to Casa Rosada (Pink House), where government headquarters are located, and is a lesson in Argentine political and economic history.

You can start the tour at Plaza San Martín  which is full of shady trees and also where the Monument to the soldiers fallen in Malvinas/Falklands is placed. The neighboring Kavanagh building is another important landmark, and in front of Plaza San Martín, in the Plaza Fuerza Aérea Argentina, is  the Torre Monumental clock tower  which is another of the city’s historical sites. Further on, a few blocks with skyscrapers and banks form part of the central commercial district of the city, and here you will find some emblematic skyscrapers such as Torre Catalinas Norte, named after Alem’s unrequited love, and others such as the IBM tower and the Alas building. In front of Catalinas is the Edificio Dinamarca, which on weekdays has a good Danish lunch spot, Club Danés, on the 12th floor with a great view of the river and skyline.

Crossing Corrientes Avenue (from where you can see the Obelisco), the Centro Cultural Kirchner, once the central post office of the city, is well worth the visit and offers a lot of interesting exhibits and cultural activities. Other government offices line Alem until reaching the famous Casa Rosada and Plaza de Mayo, where government headquarters are located. Don’t miss out on one of the weekend tours before losing yourself on the other side in the San Telmo district as you look for antiques and a nice place to stop for coffee.

Sometimes, mistakes can result in wonderful surprises. Such is the case with some of the cities hidden passages, consequence of urban miscalculations. These narrow streets are charm filled corners to stumble upon whilst losing oneself in the city maze.

Mirrored buildings and an eighty-year-old man who fixes antique clocks make walking into this passage almost like walking into a story. Additionally, the art bookstore and small independent gallery ‘Asunto Impreso’ makes for an interesting visit in the historic neighborhood of San Nicolas.

A historic passage in the Palermo neighborhood which housed immigrants and working class in the early nineteen hundreds. The cobblestones and low houses survived the real estate boom and now coexist with the neighboring streets full of high-rise buildings. This passage, which Jorge Luis Borges wrote a poem about (La Cortada Bollini), is now home of the Bollini foundation  and of La Dama de Bollini, an elegant cultural cafe in which poetry readings, live jazz and exhibitions take place.

The Kavanagh building in the Retiro area is said to have been commissioned by Corina Kavanagh to avenge the rejection of the Anchorena family of the romance between Mrs. Kavanagh´s daughter  (who wasn’t considered aristocratic enough) and one of the Anchorenas.  The instructions the architects received were to block the view from the Anchorena palace to the Santisimo Sacramento church they had built (which they were very proud of) with the Kavanagh building. From then on the only frontal view of the church that remains is through the passage.

A quaint passage in the Recoleta area with antique French style constructions and balconies. Once residential, it is now a place to stop for something to eat. We recommend brunch at Sirop Folie.

Tango and the Abasto market characterize the Abasto neighborhood, where Carlos Gardel grew up. In the neighborhood is a colorful passage of painted houses where cultural activities abound.

Way of the beaten path, in the neighborhood of Barracas, is a beautiful passage that was intercepted by artist Marino Santa Maria who not only painted the facades of the houses but also decorated them with mosaics and pieces of glass.  The historical neighborhood, although somewhat unsafe, is also lined with grandiose houses of early rich immigrants who abandoned the neighborhood after an outbreak of yellow fever.

The history of the Kavanagh is worth telling and it’s even more interesting than this wonderful building.

The skyscraper was also at the time it was built the highest building in South America and the construction only took 14 months, a total record.